A true Atlantic outliner- Sula Sgeir is one of the UK’s most remote islands. 50 Miles from Cape Wrath, the northwest tip of the UK mainland, few have had the pleasure of touring this amazing Scottish island steeping in history, culture, and wildlife.

‘Sula Skeri’ translated from Gaelic /Old Norse for ‘Gannet Skerry’, the island is home to one of the largest seabird colonies in the UK. It is now a Site of Special Scientific Interest and a Special Protection Area.

Sula Sgeir was used in early times some 1300 years ago as an isolated location for some of the first traveling monks in search of ‘a deserted place at sea’, for spiritual enlightenment. Significant religious centres such as the island of Iona founded this idea of deprivation in order to achieve the experience of ‘white martydom’. A number of small stone black houses were built on the island were early monks would isolate themselves in order to be close to God. Remains of these small cells can still be seen dotted across the island.

Just 11 miles away is North Rona, another of the UK’s most remote islands. The two islands are starkly different, North Rona with is sloping green fields and Sula Sgeir with jagged black rock.  North Rona of course named after the famous St Ronan who was rumoured to have brought his sister Brenhilda to the remote islands. Brenhilda tried to settle on Sula Sgeir, unfortunately to be discovered a little later on with a sea birds’ nest inside her ribcage.  Lesson learnt that Sula Sgier is truly barren and one gives life to the phrase ‘wild Scotland’.

The cliff sides of Sula Sgier are filled with nesting Northern Gannet, to the left a cairn stands out, built by one of the men from Ness.

The wildlife on and around Sula Sgier is truly some of the most impressive on the north west coast of Scotland. The birdwatching on Sula Sgier in particular is breath taking as it is home to one of the UK’s largest colonies of Gannets.

Around 9000 breeding pairs of Northern Gannets nest on Sula Sgier, making up 3.4% of the North Atlantic population. Alongside them nests Common Guillemot, Black legged Kittiwake and Nothern Fulmar too.

Its easy to feel immersed within the Gannet colony if you are touring the island on foot or boat, the calls from the bird block out most noises and the smell of the guano is very apparent too!

Northern Gannets are the UK’s largest seabird, with a 6ft wingspan they are about the size of a goose, they are truly incredible birds to watch as they dive towards the sea at 60mph to catch fish.

Depending on what time of year you arrive on Sula Sgeir nesting Fulmar cover every expanse of the island. Great care must be taken not to disturb the nesting birds, not only for their sake but also to ensure they don’t exhibit their defence mechanism; which is to expel their stomach contents on you!

A young Ganet ‘Guga’ sits on the rocks waiting for its parents to return for a feed..

Famous for its gannet colony which is visited by the Outer Hebridean men of Ness on the Island of Lewis, once a year in a ritual collection of guga (young gannets) for eating. This is a traditional Scottish practice and the earliest record dates back to 1549. Approximately 2000 Gannets can be harvested, this is the only exception in the whole of the UK. Men from Ness stay in old Black Houses left by Monks for up to 3 weeks collecting the birds. Their meat is eaten as a delicacy on the Outer Hebridean Islands and can be sold for up to £16 per bird.

The tradition has been under much criticism over the years but has been deemed to be sustainable.

The men hunt the birds on the cliff sides by using a long stick with a noose on the end, they capture the birds by looping the noose around the bird’s head then passing them to another man which will then hopefully kill it with one hit from a bludgeon. The birds are then put into bags and sent down to a processing area via a system of pulleys (the sticks and ropes can be seen on the floor on the island). They prepare the birds first by stripping off the feathers by hand, and then roasting them over an open fire to strip the meat away from the carcass. The meat is said to have a very strong salty flavour of fish and is either loved or detested!

The video documentary ‘The Guga Hunter of Ness’ was completed in 2011 following the ritual from start to finish, it was an intimate look into the Guga hunt. It is well worth a watch to learn about such a rare and unusual spectacle, the only one of its kind in the UK. This doesn’t compare of course to visiting the mysterious island of Sula Sgier in person, which is of course only achievable by boat trip. 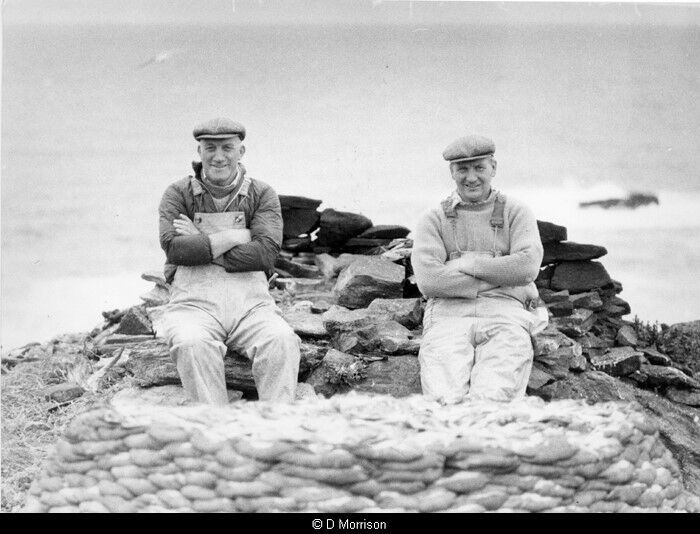 The men from Ness sit in front of their pile of harvested Guga.

There are no scheduled ferry services to Sula Sgeir.