Eilean Nan Ron is a collection of small islands and skerries off the north coast of Scotland, in the region of Sutherland. It translates from Gaelic as ‘Seal Island’, Eilean Nan Ron has a fascinating history, once inhabited it is now only home to a large seal colony.

Eilean Nan Ron is owned by the Countess of Sutherland (Sutherlands Estates).

The island of Eilean Nan Ron once had a thriving community, who originally emigrated to the islands during the highland clearances. In 1881 the population peeked at 73 individuals, at this time there was 8 houses and a school. In 1938 there were 9 individuals from the McKay family evacuated off the island, they were paid £100 from the Sutherlands Estate which at the time was considered a decent compensation. The remains of the semi ruinous houses still stand and can be enjoyed by visitors taking a boat tour to the island. The residents were self-sufficient with large areas for farming stretching out the front of their houses to the shore line, each family had a strip of land that they worked which were segregated by a stone wall, the remains of these walls can still be seen. The residents also kept livestock, sea fished and even grew their own Tabaco. Life was difficult on the island which lead finally to evacuation, people didn’t have working fridges so all of their food was salted for preservation. 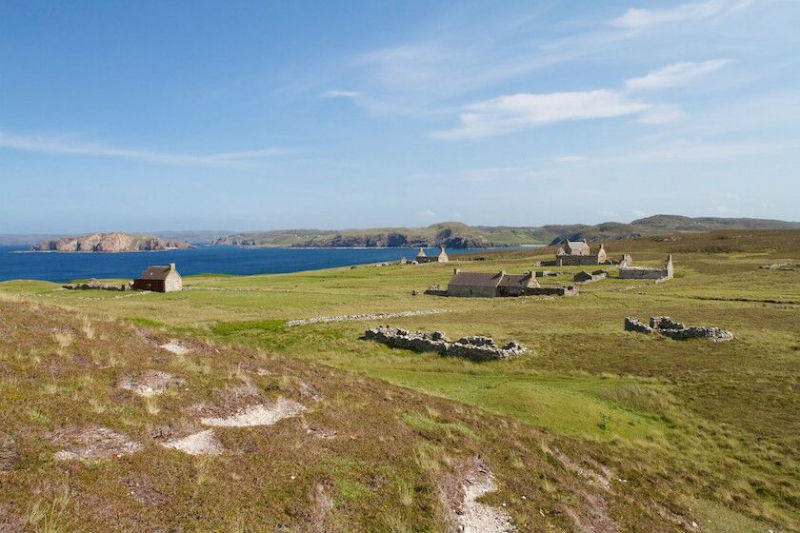 Nan Ron for its seal colony, around 350 seal pups are born there each year. Grey seals are its main occupants which are the larger of the two UK species. Around 600 (2.3% of the population) Barnacle Geese winter on the islands between October to April, the Geese fly in from Greenland and feed on vegetation which grows on the fertile slopes.

Soay sheep which belonged to the islanders of Nan Ron have been left behind after the evacuation. They are a hardy breed ranging from a dark brown to . They were believed to of been introduced to the coast of Scotland by Vikings who would drop them off on islands to breed, like a living meat larder.

The main island of Cnoc compromises of 138 hector (341 Acre). The island has a ‘waist’ where the old settlement resides. There are two hills on Nan Ron; Cnoc ‘flaming knoll’ at 76 meters in height and Cnoc Hag’s knoll’ at 75 meters. On the north side of the there is an impressive natural arch which is best enjoyed by boat.

The second smaller island is Eilean Iosal ‘low or humble island’ is joined to the main island by a narrow channel only at low water. There are of beaches, to the west Mol Mor known as ‘big pebble beach’ and to the west Mol Coinnle ‘oily surfaced pebble beach’. This is the point for anchoring and there is an old set of steps up the steep cliff which is no longer in fantastic condition but still useable.

There are no scheduled ferries to Eilean Nan Ron.

North Coast Sea Tours welcome enquires regarding private group bookings for visits to Eilean Nan Ron. Visits could be as part of our uninhabited Islands camping trip from Kylesku – Click here for  or on a day trips departing from a location to suit customers requirements e.g. Talmine on the Scottish mainland north coast.